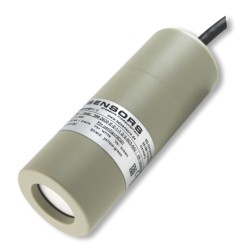 Device for measuring liquid level and converting it to an electrical signal to send to other instrumentation.

A liquid level sensor is an instrument for measuring the height of a liquid and converting it to an electrical signal which is sent to other instrumentation to display, monitor, log or control the liquid level.

There are many different types of technology use to measure liquid level, there are sensors that can be mounted above the liquid such as ultrasonic or radar which bounce a sound or electromagnetic wave off the surface of the liquid and use the travel time to determine the distance from the liquid surface.

Another method is to lower a probe into the tank and immerse it in the liquid such as a capacitive probe which detects the changing capacitance charge as the length of the probe is exposed to varying proportions of liquid and air, or pressure sensors which measure the pressure generated by gravity acting on the surrounding liquid.

Please use the table below to compare the advantages and disadvantages of each liquid level sensor technology type versus application and specification parameters.

Browse other help pages associated with the same topic group as this Liquid Level Sensor page.

Send us your enquiry for Liquid Level Sensors to get assistance with this product type.