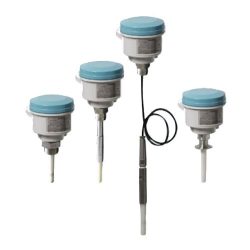 A capacitive liquid level switch is an instrument for monitoring the height of a liquid and tripping a relay contact switch or transmitting solid state relay switch output when a maximum, minimum or intermediate level has been reached. The liquid level switch output can then be utilised by other instrumentation to open a valve, illuminate a warning lamp, activate an audible alarm, or switch on a pump.

Capacitive liquid level switches are threshold contact trip devices which typically consist of a single probe which acts as an immersed electrode inside a tank. This probe interacts with an opposite electrode, usually the the wall of the tank or an outer tube, and the two are connected together to form a capacitor.

The liquid contents of the tank act as the dielectric medium, which will affect the capacitance created between the two electrodes. If the liquid level rises and falls, this will change the capacitance measured by the probe in a predictable way, and therefore it can be used very effectively as a measurement of liquid level.

A capacitive liquid level switch probe makes direct contact with the liquid to be measured, and therefore material compatibility has to be a consideration, but for most applications a stainless construction is more than adequate for most fluids.

Since the capacitive level switch probe is essentially a stainless steel rod fitted to a tank, it is possible to construct the device to withstand high pressures so that it can be used on sealed pressurised tanks.

Also, since there is no sensitive components immersed in the fluid it is possible to use them on higher temperature media that would not be tolerated by other types of liquid level switch.

Capacitive liquid level sensing probes are generally mounted through the top or side of a tank with probe protruding into the tank. Probes mounted into the side of the tank will activate when the fluid reaches the probe. Probes that extend down the tank can be set to trigger at different levels using multiple contact switch relays.

Send us your enquiry for Capacitive Liquid Level Switches to get assistance with this product type.