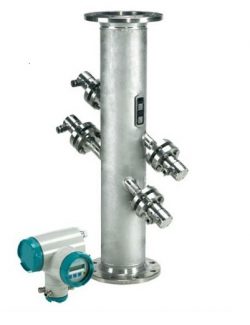 Transit time ultrasound flow metering instrumentation for measuring the volume of a liquid that has transferred over a period of time using upstream and downstream ultrasonic transit time difference.

Transit time ultrasound sensor technology transmits and receives a high frequency sound wave pulse, upstream and downstream of flowing liquid. The time taken for the acoustic pulse to traverse the distance between the transmitter and receiver is recorded. If the acoustic medium is moving away from the receiver, the pulse will take longer to reach it, and vice versa, if it is moving towards the receiver, the pulse will arrive quicker.

An upstream transit time can be measured by placing the pulse transmitter downstream, and the receiver upstream. The receiver can be mounted on the opposite side of the flow, to create a diagonal path through the flowing liquid. Alternatively the receiver can be placed upstream on the same side as the transmitter, and the pulse bounced off a reflector on the opposite side. Ultrasonic sensors can include both an acoustic transmitter and receiver in the one device, therefore it is possible to alternate operation between upstream and downstream transit time modes using the same two devices.

Since there is a direct relationship between the speed of the medium and difference in transit time, the flow velocity of the liquid can be calculated from the transit distance, upstream and upstream transit time measurements and the appropriate mathematical formula.

The performance of a transit time ultrasonic flowmeter is very dependent on the cleanliness and purity of medium being measured. Any particles or gas bubbles in the liquid will interfere with the transmitted acoustic pulse causing it to deflect and attenuate in an unpredictable way. Therefore it is only practical to use this type of ultrasonic flow meter with clean and pure liquids.

Since there is no contact with the fluid to be measured, ultrasound sensor technology can be used in applications where sensors requiring contact are otherwise prohibited. These sensors have no moving parts which makes them very reliable, requiring very little maintenance.

A liquid volumetric flow meter is an instrument which can measure either directly or indirectly the volume of a fluid which is passing through a specific location in a set period of time.

A ultrasonic liquid volumetric flow meter may also include additional electronics such as a digital indicator for displaying the total volume measured to date.

Send us your enquiry for Transit Time Ultrasonic Liquid Volumetric Flow Meters to get assistance with this product type.