What are the different ways of pressure sealing a BSP parallel thread?

There are two distinct styles of seal typically used for pressure instrumentation with a BSP thread fitting.

Pressure connections which include the suffix EN 837 or DIN 16288 are sealed on the end of the thread with a small diameter O ring which is placed around the post protruding from the end of the thread. In the female mating part of the pressure connection there is a hole with sufficient diameter to locate the male end post without pinching the O ring.

1/4 BSP Male DIN16288 and G1/4 Male EN837 are a couple of examples of how this style of connection is described. Prefixing with G, is equivalent to adding BSP after the pipe size, although BSPP is more strictly correct to define the parallel version. 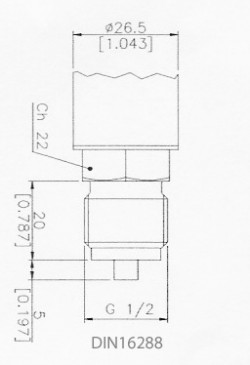 The other common style of sealing a BSP thread is to make the seal around the outside of the thread at the opposite end of the thread via an elastomer seal sandwiched between the two outer surfaces that come together. Pressure connections that include the suffix DIN 3852 are compatible with this sealing style.

There are subtle variations in DIN3852 pressure fittings available, but the following are the most common examples: 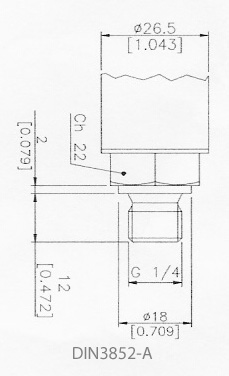 DIN3852-A is used with a bonded seal (also known as a Dowty seal) which is a steel washer that has an elastomer ring bonded to the inside diameter of the washer. Some pressure connections also include a tapered shank which assists in the correct alignment of the bonded seal. If there is no tapering it is advisable to use self-centering bonded seals to avoid a poor alignment of the seal which may compromise pressure tightness. 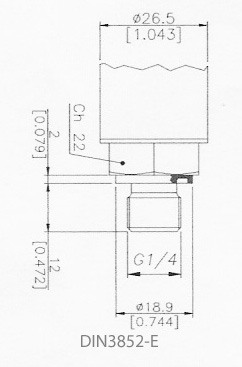 DIN3852-E type pressure fittings include a channelled profile in the sealing face for accepting an elastomer seal. The main benefit of this connection type is it’s convenience at being integral to the process connector eliminating the need for additional components or alignment of the seal.

There are mainly two ways of identifying a british standard pipe parallel (BSP-P) thread, either with the thread size suffixed by “BSP-P” or prefixed with “G”.  Often the 2nd P is left off because BSPT tapered threads are less common and BSP is assumed to be parallel unless otherwise specified.

All of the following threads are different ways of describing the same thread: 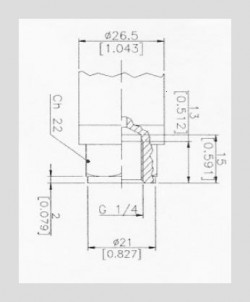 I would like to know if a 1/2 inch NPT instrument connection would fit into a 1/2 inch BSP sample port or could we use a G 1/2 B connection instead?

Neither will work, BSP or G parallel threads are not compatible with NPT tapered threads, ideally you should use an adapter between the two threads to be sure of a reliable seal between the two different types of thread.

Where can we source a pressure DP transmitter flanged with a flush diaphragm for liquid level measurement with an output over 0-200 inH2O?

We suggest you contact Wika or ABB, which are both instrumentation manufacturers that specialize in the supply of differential pressure transmitters with oil filled diaphragm seals and capillary tubing.

What are the different types of hygienic tri-clamp fittings?

Hygienic or Sanitary Tri-Clamp fittings are used by industries that manufacture products which must be protected from contamination such as food, beverage, pharmaceuticals or biotechnology.

Tri-Clamp fittings are designed to reduce the presence of crevices which encourage bacteria growth and make it easier to clean the surfaces which are in contact with the process media.

The different sizes of Triclamp fittings are defined by two separate parameters, one is the sealing face flange diameter and the other is the diameter of pipe that the flange is intended to be used with:

It is a type of tapered thread process connection, normally written as 1/4inch – 18 NPT male, the 1/4 inch (0.25″) refers to the nominal NPT pipe size and the 18 refers to the number of threads per inch.

For complete details of the different sizes for this type of process connection, view this National Pipe Thread page.

Is there any difference between 1/4G and 1/4NPT female threaded connectors?

Yes there is a difference and they are not compatible with each other:

1/4G normally written as G1/4 or 1/4BSP(P) is a parallel thread typically used in Europe.

1/4 NPT is a tapered thread typically used in USA.

The sealing technique for both types is fundamentally different, NPT relies on the gradual compression of the flanks of the internal and external thread to directly form a seal on the thread, whereas a G1/4 provides the mechanism for compressing a seal typically between two flat surfaces at one end of the male thread.

I have a pressure sensor for use on air with a G1/4 female process connection and would like to convert it so it can accept 6mm OD tubing. Would you have some kind of adapter that could do this?

If the pressure is not going to exceed 16 bar we would suggest a John Guest PM010612E 6MM x 1/4″ straight threaded to tube adapter fitting.

The adapter has a built-in O ring seal which acts the same as bonded or dowty seal for sealing the 1/4 BSP (G1/4) thread end.

The 6mm OD tube is simply pushed into the other end of the adapter and it self-seals with the tube.  To remove just lift the inner part of the adapter to break the seal and release the tube. 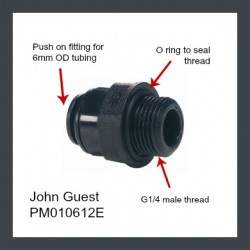 They are both the same, since the ’19’ refers to 19 threads per inch (tpi) which is the standard thread pitch for a 1/4 BSP P thread.

Send us your enquiry for a product associated with this Process Connections page, and get assistance with selecting a product for your application.